Here are my current thoughts on trends in the COVID-19 pandemic. First thing is that I made some predictions early last month. Two unfortunately were accurate. Hospitalizations across the nation did double, and the the CDC was underestimating the number of near-term deaths. They still are.

I was fortunately wrong on one count. I feared that hospitalizations would triple across the country. That's happened in a number of large states, but on a nationwide basis we haven't come close to that.

Here's what went right. I first registered my fear on November 5. On that day hospitalizations were increasing at an accelerating rate in states representing 194 million people. 8 days later the situation had worsened considerably. Hospitalizations were accelerating in states representing 316 million people--virtually the entire country. It looked like my worst case scenario was playing out.

Then the trend reversed as soon as it arose. Hospitalizations started to decelerate in the Midwest and subsequently started to fall. As of today, hospitalizations are falling in 24 states representing 103 million people. They are increasing in the rest, which, unfortunately includes the five most populous states: CA, TX, FL, NY, and PA.

It's a volatile statistic, but as of this evening hospitalizations are accelerating in all five of these states, but Pennsylvania.

So, where to from here?

There's a couple of reasons I don't think we've seen the impact of Thanksgiving, if there is going to be one. First, from the day the Sturgis Motorcycle Rally began in South Dakota (a gathering of over 300,000 people in a small area), it took over five weeks for hospitalizations to start discernibly increasing. Second, if we were already seeing a Thanksgiving impact I don't believe we'd still be seeing decreasing hospitalizations in the Midwest.

California is the most troubling state at the moment. Hospitalizations have been accelerating there for 7 weeks now. This has only happened in two other states: Arizona, and Illinois. In California's case there is no indication hospitalizations are poised to decelerate. Depending on the source, California's new cases were between 40 and 50 thousand today. (There's confusion about the number because today's figures included cases left out of prior reports).

Hospitalizations in California are increasing at a pace similar to other states where we've recently seen spikes: Illinois, Michigan, the Dakotas, etc. In fact, it's really quite remarkable how similar the trends appear across states and countries. Where they differ is in the per capita hospitalizations at the peak. That figure is a good indication of how stressed a state's healthcare system becomes.

In California there are currently 40 COVID-19 hospitalizations per 100k residents. 7 days ago it was 30. It's one thing when we see that kind of pace in South Dakota; a state with a total population of less than a million. It's quite another when it occurs in a state with a population of nearly 40 million.

For additional context, over the summer hospitalizations per 100k people peaked at 44 in Florida and 38 in Texas. It's nearly certain California will soon exceed Florida's peak. I don't know where it ends.

The numbers in the attached chart are the week-over-week increases in hospitalizations for each state. Green means the total number of COVID-19 patients is decreasing. Red means they are increasing. Dark red means the increases are accelerating.

The worst case scenario I voiced a few weeks ago is that Thanksgiving will have a significant impact on hospitalizations which we won't see until the week of Christmas; too late to deter people from large family gatherings, which will then compound the problem.

That may not happen. The threat from Thanksgiving may have been overstated, or people were careful to protect vulnerable friends and relatives. I'm not betting on it, but we'll soon know. Don't take any chances with people who are vulnerable to the virus. 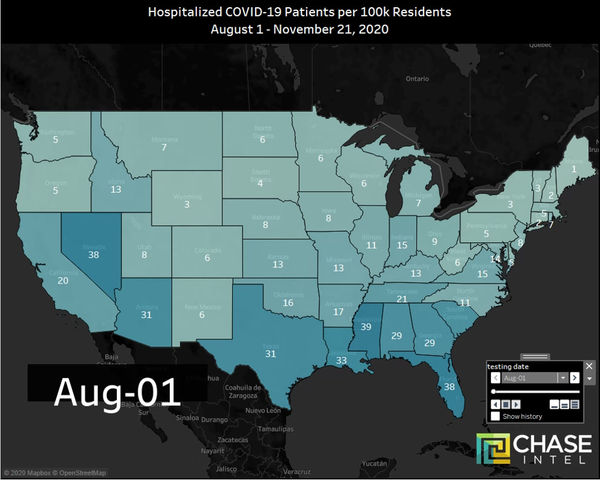